“The militants assured us that they will not touch us. They said they are not after us,” resident Nur Hussein Abdi told The Associated Press. “But in reality, they were surrounding our whole village for a deadly massacre. What happened the next day was a total bloodbath.”

Abdi escaped by hiding on a rooftop, a horrified witness to one of the worst mass killings in Ethiopia in recent years. Hundreds of people, mostly ethnic Amhara, were slaughtered in Tole village and the surroundings on June 18 in the latest explosion of ethnic violence in Africa’s second most populous nation.

Multiple witnesses told the AP they are still discovering bodies, with some put in mass graves containing scores of people. The Amhara Association of America said it has confirmed 503 civilians killed. Ethiopian authorities have not released figures. One witness, Mohammed Kemal, said he has witnessed 430 bodies buried, and others are still exposed and decomposing.

Kemal begged Ethiopia’s government to relocate the survivors, saying the armed men had threatened to return.

“They killed infants, children, women and the elderly,” resident Ahmed Kasim said. The Amhara Association of America said the dead include a 100-year-old and a one-month-old baby, and some people were killed in a mosque where they had tried to hide.

Residents and Oromia regional officials have blamed the Oromo Liberation Army, an armed group that Ethiopia’s government has declared a terrorist organization. An OLA spokesman denied it, alleging that federal troops and regional militia attacked the villagers for their perceived support of the OLA as they retreated from an OLA offensive.

Again, Ethiopians are left wondering why the federal government failed to protect them from the violent side of the country’s ethnic tensions — and why ethnic minorities in a federal system based on identity are left so vulnerable.

Teddy Afro, Ethiopia’s much celebrated pop star, released two songs this week highlighting the crisis that has worsened in the past four years and dedicating his songs to civilians who have lost their lives.

“It’s never an option to keep quiet when a mountain of death comes in front of me,” one of his lyrics says.

On Friday, thousands of students at Gondar University in the neighboring Amhara region protested the killings and demanded justice.

Ethiopia’s Prime Minister, Abiy Ahmed, has said security forces have launched a military operation against the OLA, but many Ethiopians appear skeptical after seeing the deadly cycle play out in the past.

The president of the Oromia region, Shimelis Abdisa, on Thursday acknowledged that it will be difficult to arrange security in every location, but said the current operation “will cripple the enemy’s ability to move from place to place.”

Ethnic Amhara are Ethiopia’s second-largest ethnic group but have found themselves under attack in some areas where they are in the minority. Several dozen were killed in attacks in the Benishangul Gumuz and Oromia regions over the past three years alone. 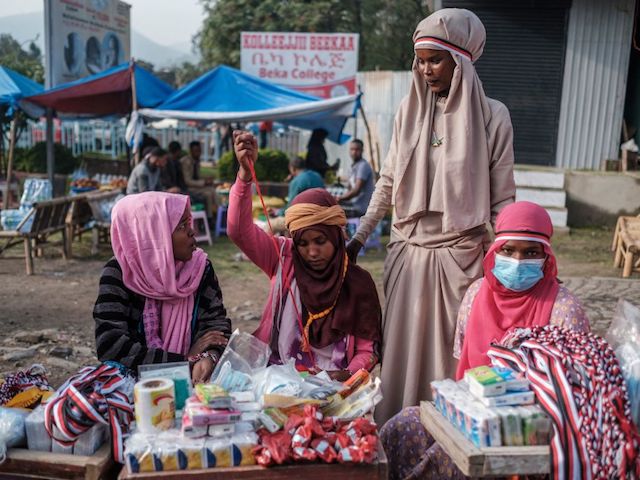 Street vendors sell flags and merchandises depicting the Oromo regional colours in the streets of the city of Bishoftu, on October 2, 2021, thanksgiving holiday celebrating the end of the winter in Oromia Region. (Photo by Eduardo SOTERAS / AFP)

“Ethnic Amharas who live outside of their region do not have legal and political representation, which results in no protection,” said Muluken Tesfaw, a community activist who tracks abuses against the Amhara. “There were even speeches by Oromia region government officials that seek to reduce Amharic-speaking people.”

“An anti-Amhara narrative has been spreading for over 50 years now,” said Belete Molla, chairman of the opposition NaMA party. “The Amhara living in Oromia and Benishangul are hence being targeted.” He also accused some members of the Oromia region’s ruling party of “working for or sympathizing with the Oromo Liberation Army.”

Ethiopia continues to struggle with ethnic tensions in several parts of the country and a deadly conflict in the northern Tigray region that has severely affected the once rapidly growing economy, but the prime minister is adamant that better days are ahead.

“There is no doubt that Ethiopia is on the path of prosperity,” he declared in a parliament address this month.

But Ethiopians who escaped the latest attack seek answers.

Nur Hussein said he and other Tole villagers had called nearby officials about the appearance of the armed men shortly before the violence exploded. “Their response was muted. They said there were no specific threats to respond to. But look at what unfolded,” he said. “God willing, we will get past this, but it is a scar that will live with us forever.”