Chinese government officials canceled most of the lavish events – concerts, festivals, and major travel attractions – typically organized around the communist holiday of May Day, celebrated on May 1, this year, claiming it necessary for people to stay home to prevent the further spread of Chinese coronavirus.

The People’s Daily, the official newspaper of the Communist Party of China, claimed on Monday that “Chinese people chose to stay put” this year to help fight the coronavirus pandemic, though later admitting the same article that Communist Party officials either mandated or heavily pressured citizens not to travel or attend May Day gatherings. The move represents a major shift from the past two years when Beijing had boasted of hundreds of millions of travelers partaking in “red tourism” to honor meaningful sites in the history of the Party.

May Day, sometimes referred to as “International Workers’ Day” or “Labor Day,” is a holiday celebrating the murderous legacy of communism. Communist countries often observe the holiday with massive (usually mandatory) parades, street festivals, and long speeches by their respective dictators. Outside of the communist countries, leftists often observe the day with violent riots. This year, Paris, Istanbul, and Seattle experienced some of the most violent May Day observances.

In China, May Day kicks off a five-day “Golden Week” holiday typically second only to the celebrations of the founding of the Chinese Communist Party in October.

This year, however, “citizens are expected to follow local policies of restriction, reducing outings to avoid infections of the more contagious Omicron variants,” according to the People’s Daily.

File/A woman wears a protective mask as she takes pictures of a show at a local shopping area for the May Day holiday on May 3, 2021 on the outskirts of Beijing, China. (Kevin Frayer/Getty Images)

Amid extreme pressure to stay home, the People’s Daily reported that China “is expected to see notable drops in passenger traffic for the Labor Day holiday.”

“Li Xiaoyong, deputy director of the market management department of the Ministry of Culture and Tourism, said that it is important to make good use of information technology, promote online and offline integration, and provide more tourism products with no contact or gathering,” the communist newspaper relayed.

The People’s Daily reportedly used the word “chose” to describe the reason why no one was celebrating while admitting that Communist Party officials were either banning people from moving or threatening them not to.

“Amid the new Omicron clusters, the Chinese capital city on Saturday announced to intensify restrictive measures against COVID-19 to best reduce cross-infection,” the newspaper noted about Beijing. “A negative nucleic acid test result within 48 hours is required to enter public venues during the holiday. Parks, open venues for entertainment and cultural activities are also capping the number of visitors to 50 percent capacity.”

In Guangxi, the newspaper admitted, officials “issued a notice asking citizens to minimize trans-provincial or trans-city travel,” while in Shandong province in the east, “people are encouraged to enjoy leisure time at their doorstep.” The People’s Daily did not specify what happens to people who disregard the “encouragement.”

Last week, the state-run Global Times newspaper belied significant economic concerns within the Communist Party about canceling May Day. To address the potential loss of millions in tourist revenue, local governments began handing out coupons “to bolster consumer confidence and encourag[e] local spending during the upcoming May Day holidays.” 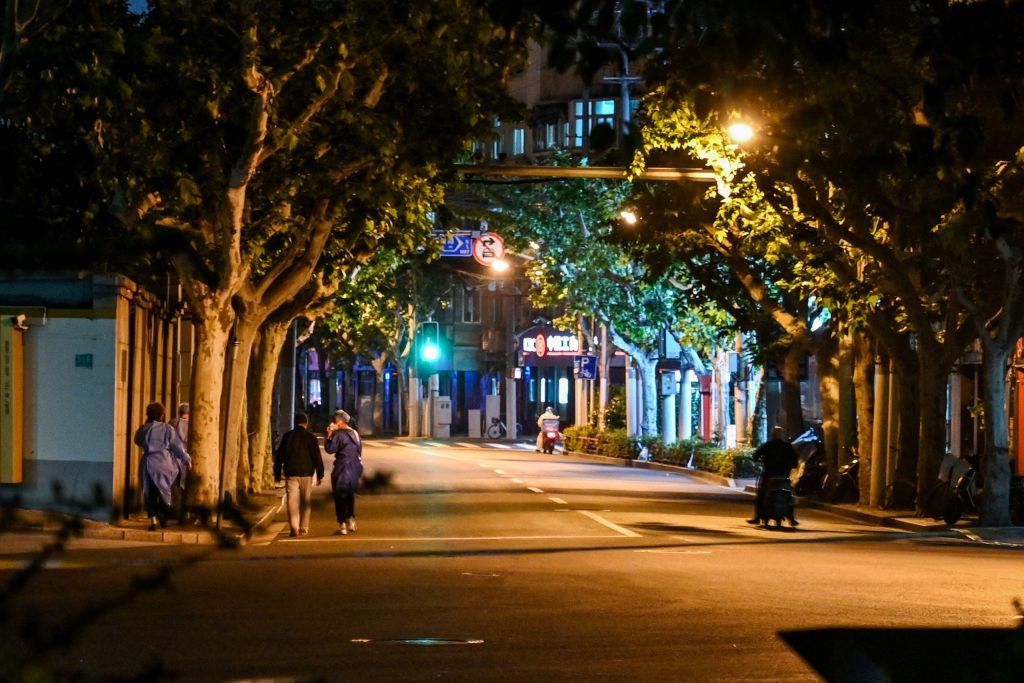 View of a street through the fence of a compound in lockdown while some workers wearing protective gear walk outside during a Covid-19 coronavirus lockdown in the Jing’an district in Shanghai on May 1, 2022. (HECTOR RETAMAL/AFP via Getty Images)

“The issuing of coupons is conducive to lifting short-term consumption, restoring consumer confidence and alleviating pressure on merchants especially those in service focused sectors which have been hit hard by the epidemic,” a regime-approved expert told the Global Times.

State propaganda had begun to warn last month that coronavirus outbreaks could significantly worsen should Chinese people attempt to travel during the May Day holiday. Regime health authorities in Beijing urged residents to “fight against the epidemic in case it escalates due to multiple risks brought by people coming from outside of the capital and increasing population flow as May Day holidays approach.”

In contrast, for the 2021 May Day holiday – during which the alpha, or original, strain of Chinese coronavirus was still dominant internationally and posed a greater risk for severe disease than the currently dominant omicron – Chinese officials boasted that they expected as many as 200 million travelers to attend over 20 music festivals, visit sites of importance to the Communist Party, and enjoy other large celebrations.

“Based on leading indicators such as search volume of tourist destinations, flight and hotel bookings, this year’s May Day holiday is expected to be the hottest Golden Week in history, with about 200 million travelers expected,” the Global Times predicted at the time.

China’s CCTV broadcaster celebrated a “travel bonanza” for the holiday in 2021.

In 2020, May Day arrived shortly after dictator Xi Jinping had loudly, and incorrectly, declared victory against Chinese coronavirus entirely in its origin location, Wuhan. Shanghai alone – now subject to an ongoing lockdown – reportedly welcomed over a million visitors to 130 tourist sites for May Day that year, just as the rest of the world began to cope with what had by then become a pandemic. The state-run Xinhua News Agency reported that 23 million people traveled on the first day of the May Day holiday in 2020, despite the lack of a vaccine against Chinese coronavirus and significant lapses in scientific knowledge on how to combat infections.