After two months of brutal, constant pain for crypto longs on the back of fears the Fed is about to yank the punchbowl and drain enough liquidity to end the party (at least until the next recession and market crash, when the Fed will double-down on easing, launch NIRP, buy equity ETFs and upgrade helicopter money to tactical money ICBMs, finally sending all cryptos to the moon and beyond), the tide may finally be turning at least according to the options market.

After bitcoin suffered its biggest drop since May 2021 as it tumbled more than 40%, sending the price to the most oversold level since the covid crash – traditionally a failsafe bullish indicator…

…. the world’s largest cryptocurrency rebounded this week after falling below $40,000 for the first time since September on Monday and has bounced as much 10%, just as we said last weekend it would.

In short, Bitcoin appears to have stabilized, and options activity suggests investors believe the test of $40,000 – a critical support level below which Mike Novogratz said last week is where he would buy more (and appears to have done just that)…

… is over, and more upside is ahead, according to Genesis Global Trading including Noelle Acheson.

For one, the skew – or difference in implied volatility of bullish and bearish bets – has recently dropped from double-digits to near zero, and revealed a decrease in investor demand for put options and an increase for call options, Genesis data show.

“That shift in preference may be bullish for the price of BTC, all else equal,” Acheson added, and indeed a look at the option-implied probability cone shows an upside target just shy of $10,000..

It’s not just option traders and billionaire investors who see $40,000 as a bottom- it is a view echoed by many analysts in the famously optimistic world of crypto. Quoted by Bloomberg, Martin Gaspar and Katherine Webb at CrossTower said in a Friday note that Bitcoin’s reserve risk, a measure of confidence of long-term BTC holders, is currently lower than it was at the coin’s last bottom in July 2021, and now stands in the “buy” zone, which could give “more weight to the indication that this is a bottom.”

The $40,000 level “has been the key pivot point,” said Bloomberg Intelligence’s famously bullish crypto analyst, Mike McGlone. Up next, $50,000 comes into play before Bitcoin resumes its upward trend toward his forecast of $100,000, he said. 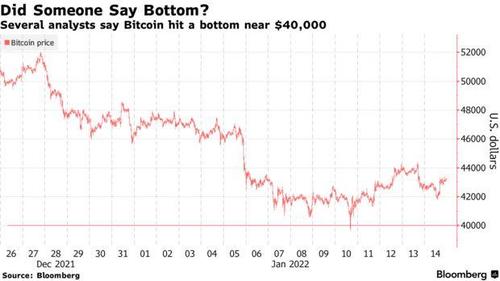 McGlone isn’t alone in his calls for Bitcoin to more than double from current levels. According to Bloomberg, Jonathan Padilla, co-founder of Snickerdoodle Labs, a blockchain company focused on data privacy, expects Bitcoin to hit that level by the end of 2022, and also said that $40,000 is likely a floor, given the level of institutional capital he expects to flow into the market this year.

“The institutional nature is dramatically different from the primarily retail focus in 2017, 2018,” Padilla said. “That shows the strength of institutional buying and the demand from the long-term perspective.” Of course, this cuts both ways, because when institutions are deleveraging, they dump those assets first that have outperformed in 2021 – such as cryptos – which is also why crypto’s correlation to risk assets has exploded as institutional adoption has grown.

David Tawil, president of ProChain Capital, was ready to watch the $38,000 level in this past week’s sell-off. But, he hoped to see U.S. tech stocks start to rebound, which signals to him that “the bottom is in” for Bitcoin, he told Bloomberg’s “QuickTake Stock” broadcast.

“This is a pretty good buying level, especially if we go ahead and just retrace the losses — you’re talking about a 50%-plus gain from a year,” Tawil said.

A surprising view comes from some of the biggest crypto skeptics around – JPMorgan, and specifically their clients, who have recently initiated a new target price for Bitcoin for this year of 2022. In a recent report, America’s largest commercial bank asked its clients where they see Bitcoin by the end of 2022. Based on the results, nearly 41% of clients believe that Bitcoin could be trading at $60,000 or above by the year-end, or about 50% higher than the current levels and more than what other asset classes can offer.

Marko Papic, chief strategist at Clocktower Group, is another skeptic – he warns that Bitcoin’s correlation with the S&P 500 remains at one of its highest readings in the past 12 months; this is happening just as tech names have swooned amid fears of a hawkish Fed.  In this environment, “you don’t really want to own high-beta risk assets,” he said. “You want to own things that are much more sensitive to value, much more sensitive to global growth and cyclicals, and that’s why I don’t think crypto and Bitcoin are going to really do great over the next three to six months.”

In his latest Crypto Keys note (available to professional subs), UBS FX strategist James Malcolm has turned quite bearish on crypto, writing that the recent drop in bitcoin prices is the result of disappointment with the SEC not approving ETFs, as well as three other reasons: 1. It’s not better money; 2. The technology may prove subpar; 3. Regulation is a rising hurdle. While we disagree with all of these points, UBS does point out something notable: whales now own more bitcoin than ever before.

Meanwhile, as debates rage what’s next for crypto, one thing that is certain is that China’s attempt to crush the largest cryptocurrency last year when it banished all crypto miners has now failed (and backfired) spectacularly:

As shown in the data below from Glassnode, with the price checking into the $42,000 range on Thursday, the mean hash rate hit 215 million terahashes per second. 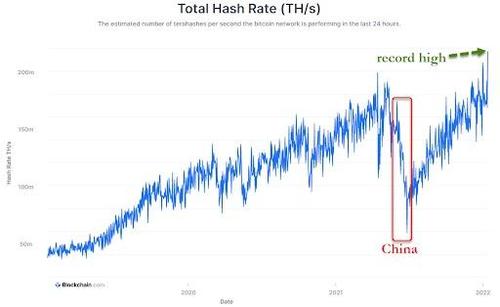 Said otherwise, Bitcoin miners continue to show resilience, and as Fidelity Digital Assets observed, the network is even “more widely distributed around the world.”

As testament to this, Jack Dorsey’s Block confirmed it would develop open-source Bitcoin mining systems in 2022. In the Twitter thread, Thomas Templeton, a general manager at Block, addressed issues relating to the availability, reliability, performance and products pertaining to BTC mining. In sum, Block’s goals for BTC mining are the following:

“We want to make mining more distributed and efficient in every way, from buying, to set up, to maintenance, to mining. We’re interested because mining goes far beyond creating new bitcoin. We see it as a long-term need for a future that is fully decentralized and permissionless.”

Building a BTC mining system “out in the open” and alongside the community is no mean feat. Econoalchemist, an established home BTC miner and BTC magazine contributor, tweeted that developing products in open source would “build trust where no reputation exists currently and also might shift consumer expectations in that direction.”

Ultimately, Block’s mining solutions may pave the way for more DIY miners to enter the space.

Ultimately, it seems the sky’s the limit for Bitcoin’s hash rate, at least until the next 2,016 blocks, when the network difficulty resets.