Oil is tumbling, with Brent sliding as much as $7 from Friday highs, to a low of $93 while WTI puked by as much as $5, briefly dropping below $87 to the lowest level since January and wiping out the entire post-Ukraine invasion gain (which means any gas price inflation now is entirely the doing of Biden and not Putin).

Going back to China, the world’s top oil importer showed signs of renewed weakness as China’s refiners process less crude and apparent consumption sinks in a headwind for global prices. Refineries handled the least oil on a daily basis last month since March 2020 as a swath of plants shut for maintenance, according to official data on Monday. At the same time, apparent oil demand fell 9.7% in July, compared with a 5.6% drop in June. China refined 53.21 million tons of crude in July, the least since April, the National Bureau of Statistics data showed.

Meanwhile there has been stability on the supply side as Russia has defied expectations of a collapse in oil production following its invasion of Ukraine. But Moscow will have to redouble its efforts to find new buyers if it’s to keep output from shrinking in the coming months. After plunging in the immediate aftermath of its offensive in February, Russian production has rebounded over the past three months as domestic refining boomed and Asian customers stepped in to take shipments shunned by Western buyers. Yet a looming EU ban on most Russian crude, as well as a gathering economic slowdown, will strike a blow to the country’s producers.

To that point, Germany’s Schwedt oil refinery has started processing US crude blended with Russian Urals, according to a person familiar with the matter. After several months of recovery, in the first weeks of August average daily oil and condensate production in Russia fell by 3% m/m to 1.428m tons, Kommersant reported, citing unidentified people familiar with data.

Paradoxically, even as oil prices continue to slide, demand for spot (here and now) continues to rise and hint at ongoing shortages in the present even if markets are increasingly convinced that the future will be far uglier. As a result, the energy sector has gotten clobbered and while most sectors are in the red, energy is by far the worst performer today. 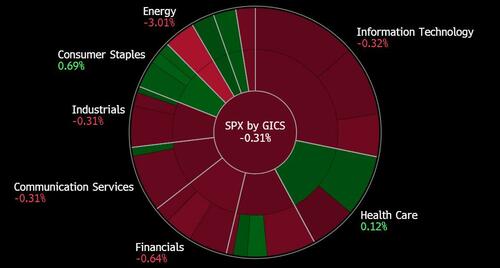