Did Fed Chair Powell just jump straight from ‘denial’ to ‘acceptance’ on his journey through grief at the death of ‘transitory’ inflation?

Speaking on MarketPlace Radio this evening, Powell said the central bank has both the tools and resolve to bring down rapid inflation — though he acknowledged that the path to lower price increases could be a painful one.

Powell: So you can see that inflation is just way too high here in the United States. And by the way, the same all over the world, really, the global economies all around the world have been hit by a series of inflationary shocks and, pretty much, I just came back from a set of meetings with central bankers from around the world, and we’re all facing the same kind of issues and the public are facing the same kinds of issues.

Powell: Some places worse, some places better. We’re facing different challenges, but then again our economy’s more fully recovered, they may be just behind us in time. But what would I say to that person? So I would say that we fully understand and appreciate how painful inflation is, and that we have the tools and the resolve to get it down to 2%, and that we’re going to do that. I will also say that the process of getting inflation down to 2% will also include some pain, but ultimately the most painful thing would be if we were to fail to deal with it and inflation were to get entrenched in the economy at high levels, and we know what that’s like. And that’s just people losing the value of their paycheck to high inflation and, ultimately, we’d have to go through a much deeper downturn. And so we really need to avoid that.

Then he poured cold water on the idea of a ‘soft landing’ that so many asset-gatherers and commission-rakers are constant telling investors is likely:

“There are huge events, geopolitical events going on around the world, that are going to play a very important role in the economy in the next year or so,” Mr. Powell said on Thursday.

“So the question whether we can execute a soft landing or not, it may actually depend on factors that we don’t control.”

I have said, and I will say again that, you know, if you had perfect hindsight you’d go back and it probably would have been better for us to have raised rates a little sooner. I’m not sure how much difference it would have made, but we have to make decisions in real time, based on what we know then, and we did the best we could. Now, we see the picture clearly and we’re determined to use our tools to get us back to price stability.

Funny that! We seem to remember a bunch of digital dickweeds screaming that this was anything but transitory in May 2021

US equity futures are falling on this news… 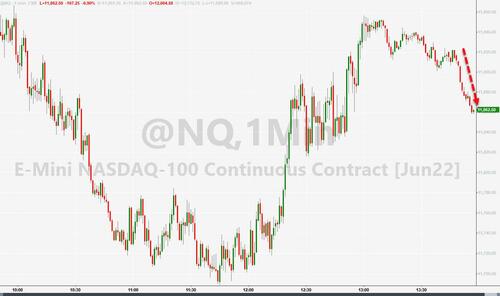 It seems Powell really does want to control inflation by crashing stocks.